A living manifesto for living communities 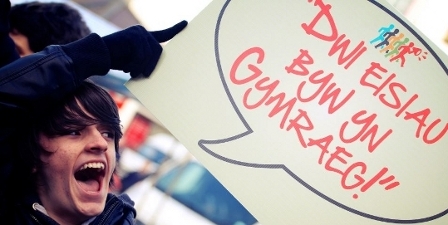 A living manifesto for living communities

An Action Plan for Language, Work and Community

A public discussion across Wales’ communities about the priorities for sustaining and developing the Welsh language in every part of Wales.

There is no doubt that the Census results highlight the crisis facing the Welsh language. There has been a drop in the number of Welsh speakers in every part of Wales. The biggest drop has been in the areas where the Welsh language is strongest.

In essence, this manifesto reiterates the call ‘Dwi eisiau byw yn Gymraeg’ (I want to live in Welsh) as heard in rallies all over Wales over the last few months. We believe that the fate of the language can be changed, with political will and positive, participatory campaigning. In this document, we outline a work programme that marks a starting point for changing the fate of the language – and a reversal of the decline seen over the last decade – in our communities and nationally.

Thus, this manifesto contains practical, realistic ideas, that could be implemented in 2013/14 by our Government in Wales, our local authorities, and all our national and local institutions in addition to ourselves. The policies contained here are based on Tynged yr Iaith II, the new direction Cymdeithas yr Iaith Gymraeg set for its own activities, in the movement’s fiftieth year. The message of Tynged yr Iaith II was that years of campaigning have ensured that the Welsh language will survive. The question, by now, is what kind of future will it face? A language for the classroom, dry documentation, a language for signage - or - a language for our nation and our communities?

However, Cymdeithas yr Iaith does not claim to have all the answers (in line with our peaceful campaigning approach). This is why we invited people all over Wales to respond to this document.

Votes were held on amendments to the Maniffesto Byw on the basis of those responses on 8th June, 2013. We will continue to collect responses to the document and are willing to co-operate with anyone who wants to deal with the issues raised here. We call on the people of Wales to empower themselves, along with the community of which they are a part, and declare that they want to live their lives in Welsh.

The census results show that two of the main aims of the Welsh Government’s previous language strategy Iaith Pawb were not achieved. There was a reduction, not only in the percentage of Welsh speakers, from 21% to 19%, but also in the number of wards with over 70% able to speak the language. Roughly speaking, it appears that there are around 3,000 fewer Welsh speakers every year. 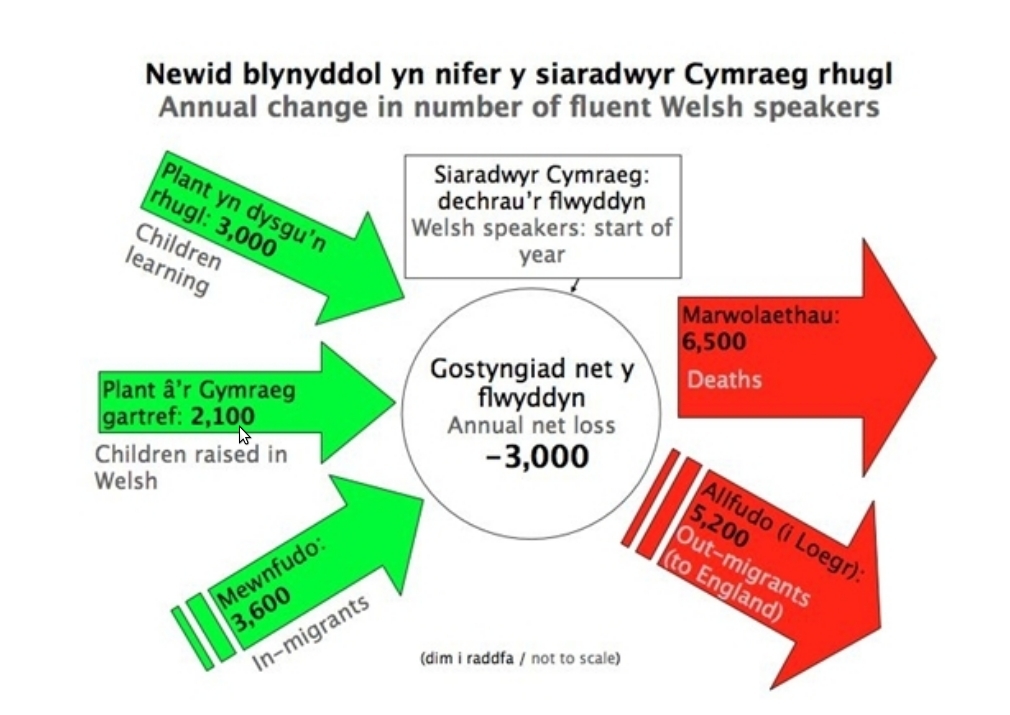 These figures highlight a number of factors that influence the state of the language. It’s apparent that outward migration - such as young people leaving their communities to look for work - is one of the main factors leading to the linguistic crisis. That’s why the first section (1.1 - 1.11) of this manifesto concentrates on policies that would create work where it is needed and strengthen the contribution of employment policies.

We believe that the Welsh language belongs to everyone in Wales - it should not be considered an optional part of a minority culture, but rather a right for all, including non-Welsh speakers. The language standards (3.7) and education policy (4.1) should reflect this.

Here are some of the points the Government should address urgently:

Currently, the Welsh Government fails to show the vision, the leadership or the commitment needed to improve the position of the Welsh language. They should recognise the scale of the challenge, and adopt progressive policies urgently. They are currently failing to do so, as their reaction to the first version of this Manifesto shows. The answers, therefore, start with each one of us - we must show that we want to live our lives in Welsh, and help others to do so.

Cymdeithas yr Iaith believes that the Welsh language should be a language of the economy if it is to be used in our communities. Wales’ economic poverty is one of the factors leading to the out-migration of thousands of Welsh speakers every year.

The Welsh Government’s shortcomings in housing and planning since devolution have meant that Welsh language strategies across Wales have been undermined by housing developments. We are still waiting for the new Technical Advice Note (TAN) 20. Cymdeithas yr Iaith revealed that only three local authorities have undertaken Welsh language impact assessments for developments over the last 2 years, and that only 16 assessments were conducted out of 60,000 applications (0.03%). The government’s current lack of commitment was again demonstrated in the Sustainability Bill white paper, where the Welsh language was not considered as part of the sustainable communities agenda.