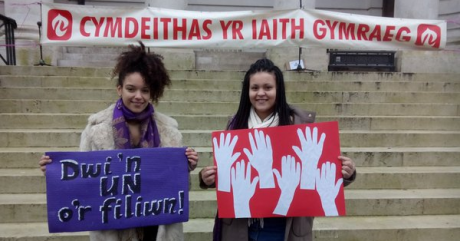 Language campaigners have called on Mark Drakeford to take on the responsibility for the Welsh language himself in his new cabinet, following his election as the leader of Welsh Labour.

At the moment, responsibility for the language lies with a Minister who does not sit in the cabinet. Cymdeithas yr Iaith have suggested that the First Minister should take the portfolio himself as an overarching issue that each cabinet secretary would then contribute towards. Campaigners have also called for the unit in the civil service working on language policy to be upgraded.

“We need all the power of Government behind the target of a million Welsh speakers. The language isn’t getting the status or consideration it needs by the Government at the moment. We feel that only leadership from the top will give us the change we need. It’s vital that all Government departments are working to meet the target of a million Welsh speakers, with each cabinet secretary taking responsibility for the language’s vitality in their own areas. The way to achieve that is for the First Minister to take the main responsibility for the language himself.

“We are also calling for a full department, rather than a minor unit, to be responsible for the language in the civil service. To ensure the success of the Government’s language strategy, it is essential to increase the capacity of officials who will need to work with the First Minister to create a million Welsh speakers.”

“We’re confident we will see a change of attitude under Mark Drakeford’s leadership. We were pleased that his manifesto concentrated on meeting the million Welsh speakers target and that it didn’t mention the foolish plans to weaken the Language Act. So, his priorities seem to be the right ones.”