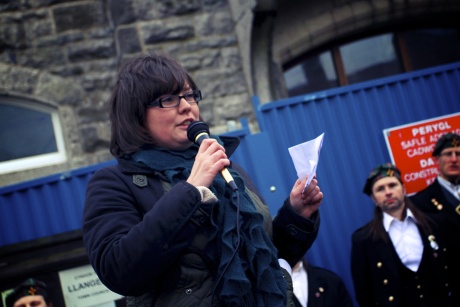 Gwynedd and Ynys Môn councils are risking court challenges if they push ahead with a change of policy that would prevent councillors from commissioning language impact assessments of planning applications, according to a legal expert.

Councillors in Gwynedd and Ynys Môn are currently considering planning policies, which would, among other things, mean that only a handful of planning applications, like new houses, would be assessed for their impact on the Welsh language. The communities with the highest proportion of Welsh speakers in the whole country are in the two counties. Gwynedd Council had previously had a policy of requiring a full language impact assessment on any plan to build five or more houses.

“It appears that the final wording of the … Local [Development} Plan was agreed during the consultation on [Welsh Government planning guidelines]. I believe that the wording of the policy is lacking given that it [is], contrary to [the Act and more recent Governmen planning guidelines]. Rather, the clear implication in the policy is that one should only give consideration to the Welsh language if the criteria for providing a “Welsh Language Statement” or “Welsh Language Impact Assessment” are met.”

“... “stopping” or “banning” a language impact assessment on the basis of the [policies and guidelines] alone would not be legally sensible and could be a basis for a judicial review unless [my advice] is followed.

“Unless [my advice] is followed ... I believe there would be a basis for making an application for a judicial reviews to the High Court. The basis for such an application would be more likely to arise if one of the Councils gave planning permission to a development without asking for a statement or assessment of its impact on the Welsh language, despite evidence suggesting that it would have a significant impact which was not sufficiently considered when preparing the development plan.”

The legal advice has come to light ahead of a councillors’ decision on one of the documents which forms part of a series of supplementary planning guidance at the end of this week (Friday, 14th June).  In a letter to councillors, Menna Machreth from the local branch of Cymdeithas yr Iaith says:

“These proposed guidelines would prevent councillors from commissioning language impact assessments on individual planning applications in the vast majority of cases. Because of this proposed system, the planning applications would be introduced without a language impact assessment of them, and so councillors would not have the evidence to either approve or reject an application on the basis of the impact of the Welsh language.

“However, thanks to Mr Lewis advice, there is clarity on two points of utmost importance for the Welsh language’s strength locally and the legality of these planning guidelines...Firstly, Gwynedd and Ynys Môn councils would be open to legal challenges if these guidelines were approved as they are… Secondly, and as a resut of the legal deficiencies of the Welsh Government’s planning advice, it is recommended that the relevant clauses in the Local Development Plan are revisited at the earliest possible opportunity so there is a way to reconsider fully the council’s policy concerning language impact assessments.

“I know that you realise the importance of this matter to strength of the Welsh language ... I hope that you will either agree to the changes recommended by Mr Lewis or postpone the decision on the guidelines so there is a way to give further consideration to the recommendations before making a final decision.”

Cymdeithas yr Iaith also argues that there is a serious lack of clarity among councillors and officers as to when they should conduct language impact assessments on planning applications. The group is now calling for new legislation which establishes a new system which creates a duty to undertake them.