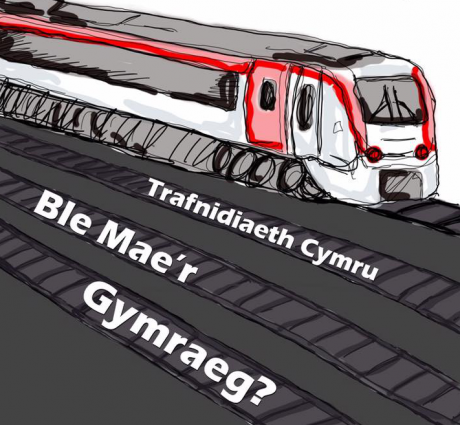 Welsh Ministers have been found guilty of breaking the law in nine different ways by failing to provide Welsh language services on the train franchise they took over fifteen months ago.

A draft judgement by the Welsh Language Commissioner lists nine breaches of language standards which came into force four years ago. Government Ministers’ failures include: train and station announcements made in English only; English-only correspondence; the launch of an app without a Welsh version; and a website where tickets cannot be bought in Welsh. The Commissioner’s finding follows a series of complaints and protests by Cymdeithas yr Iaith about the situation.

“The Welsh Government should be seriously embarrassed that they have broken their own law. After all, if the Government can’t meet its own standards, who else will? We’ve received lots of complaints from members and supporters because of these failings on our railways - it’s obvious why people are so angry about the situation. Basic things like announcements and tickets aren’t in Welsh. It’s not even possible to buy a ticket in Welsh on their website.

“All these failings were completely predictable, a long time before they took over the franchise. They could and should have planned properly to meet basic legal requirements - they should have been sorted years ago. We are concerned about the culture at Transport for Wales that has allowed this completely unacceptable situation to develop and continue. It demonstrates a serious lack of planning for the new franchise and a failure to prioritise the language as well. That attitude is a concern when you consider that Transport for Wales is supposed to gain greater responsibilities over other modes of transport.

“The Welsh Government has made the situation in terms of language rights in the transport sector worse, and far more confusing for everyone, by failing to extend language duties directly to bus and transport companies. They’ve caused this mess.