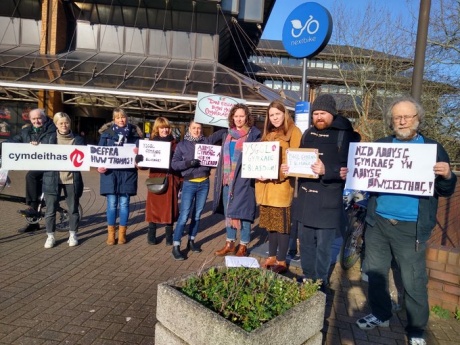 A group of protestors occupied Cardiff Council’s offices today in a campaign for Welsh-medium schools at the Plasdŵr development in the capital.

In September 2018, Council Leader Huw Thomas said "to be clear - Welsh medium schools will be a central part of the Plasdŵr development." However, the cabinet of Cardiff Council decided to consult on a proposal to establish a new bilingual primary school which would mean half the pupils going to an English-medium stream. The Council received a petition signed by 876 calling for a Welsh-medium school, with only 15 of the 180 other responses backing the councils plan for a English-medium stream on the site.

The Plasdŵr development in the north-west of the city means building up to seven thousand houses over the next seven years. These areas of Cardiff - Creigiau, St Fagans and Pentyrch - have some of the highest percentages of Welsh speakers in the capital city, with almost a quarter of the population speaking Welsh.

“Under the council’s plans, half the pupils will be treated as second class, and are not going to be fluent in Welsh and English. Only Welsh-medium schools will give pupils fluency in Welsh. And, the council has a golden opportunity, with a brand new school, to establish one. Otherwise, by not using the capital that comes with the huge housing development to open a specifically Welsh-medium school, the council is holding back the growth of the Welsh language in the area and the aspirations of the vast majority of people of the area to revive the language and see all of our young people becoming fluent speakers. Every new school should be a Welsh-medium one, that’s the shift in thought that’s needed, especially in areas like Cardiff where the population is growing.

“Revisiting the failed experiment of bilingual education would prove to be a poor means of immersing pupils in Welsh and insufficient to meet the rising demand for Welsh-medium education in the city.

The council cabinet is expected to decide on the first school which is part of the Plasdŵr development this Thursday (23rd January).