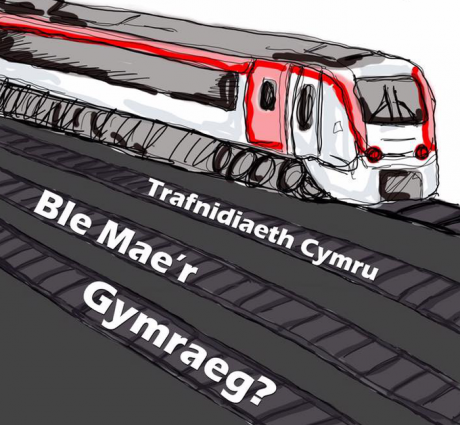 Welsh Ministers have launched an appeal against a finding that they broke the law nine times by failing to provide Welsh language services on the train franchise they took over a year and a half ago.

A draft judgement last year by the Welsh Language Commissioner listed nine breaches of language standards which came into force four years ago. Government Ministers’ failures included: train and station announcements made in English only; English-only correspondence; the launch of an app without a Welsh version; and a website where tickets cannot be bought in Welsh. The Welsh Government has now made an appeal to a Tribunal against the findings which followed a series of complaints and protests by Cymdeithas yr Iaith.

“This is a scandal. Instead of using their resources to strengthen people’s language rights, our Government is spending its time and our money on undermining them. These same Ministers have, for years, been delaying extending Welsh language rights to the transport sector, claiming they don’t have enough lawyers to do the work. But when it comes to blocking our rights to services in Welsh, they suddenly have plenty of lawyers to hand. This Welsh Labour Government is doing more to undermine rights to the Welsh language than strengthen them - it’s shameful.”

“We’ve received lots of complaints from members and supporters because of these failings on our railways - it’s obvious why people are so angry about the situation. Basic things like announcements and tickets aren’t in Welsh. It’s not even possible to buy a ticket in Welsh on their website. All these failings were completely predictable, a long time before they took over the franchise in 2018. They could and should have planned properly to meet basic legal requirements - they should have been sorted years ago.