"Last chance for the new Council" 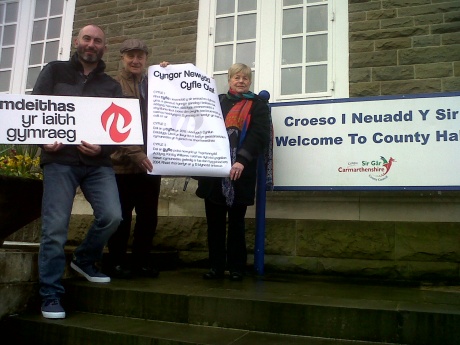 As nominations open for candidates wishing to stand in the local elections, members of Cymdeithas yr Iaith have gone to County Hall in Carmarthen to launch a campaign to call on candidates to "make the most of the last chance" to restore Welsh as the main language in Carmarthenshire.

David Williams, vice chair of Cymdeithas in Carmarthenshire, said to supporters holding banners on the steps of County Hall:

"The 2011 Census results came as a big shock to people of Carmarthenshire when we saw the biggest decrease in the percentage of Welsh speakers throughout Wales in the county. We pay tribute to the Council which ends its term next month because, under two different leaderships, it took seriously the task of strengthening the Welsh language in the county. A working group was established, a report and a new language strategy was published a Language Forum was created with the objective of making Welsh the main language of the county. Practical steps have been taken in moving schools towards more Welsh education schools and ensuring leisure provision is in Welsh.

"However, it is the new Council which will be elected in May that will govern the county until the next Census in 2021. We call on the candidates to take the opportunity to make Welsh the main language of the county. We ask them to commit to three simple steps that everyone can agree to in order to give the Welsh language a chance."

The 3 opportunities announced today by Cymdeithas:
Opportunity 1 - Provide young people with the OPPORTUNITY to make their futures here in the county, and make housing, education, recreation, economic development, and local planning central to policies. There is no point teaching young people in Welsh only for them to be lost from the county
Opportunity 2 – Make the most of the OPPORTUNITY in 2018 to review the Local Development Plan so that it serves communities rather than developers
Opportunity 3 – Take advantage of the OPPORTUNITIES given by Education Secretary, Kirsty Williams', policy to ensure the future of schools in rural communities that have been under threat since 2004. The13 years of bad luck must come to an end.