Protest in London for broadcasting devolution 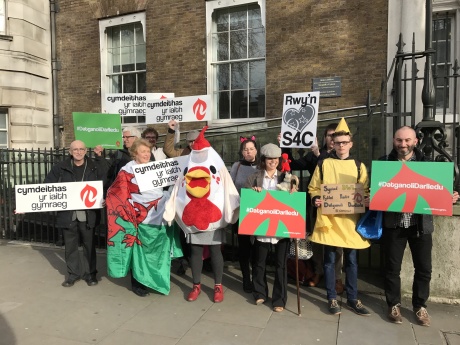 Welsh children's-TV stars have protested outside the Wales Office in London demanding that the UK Government devolve powers over broadcasting to the Assembly in Wales.
S4C has had its budget cut by 40% since 2010. The Conservatives 2015 general election manifesto committed the party to "safeguard the funding and editorial independence of S4C". However, in a debate in Westminster last month the Minister for Culture, Matt Hancock MP, suggested the UK Government could further reduce their support to the channel by £700,000 – a 10% reduction – from April this year.
Within weeks, the UK Government is expected to announce the details of a review of S4C, and Wales Office Minister Guto Bebb has said told Cymdeithas yr Iaith that devolution will 'inevitably' be part of the discussions.
Supporting the protest by TV stars in Whitehall, Heledd Gwyndaf, Chair of Cymdeithas yr Iaith commented:
"It doesn't take a genius to realise that something is badly amiss with the media in Wales. It doesn't make sense for Ministers in this department here in London, who don't know anything about the Welsh language or Wales, decide on the fate of broadcasting in our country. Decisions over the media in Wales should be made by the people of Wales - it's time to devolve broadcasting. People in Wales know what's best for the Welsh language and our communities – not Ministers and civil servants who don't have the slightest interest in the matter.

"It's clear from our conversations with MPs over recent months, including the Wales Officer, that the majority oppose any attempt to cut S4C further. And yet, with have Ministers in London suggesting that the Tories plan to break their own pledge to safeguard the channel's budget. We should be discussing how to expand Welsh broadcasting rather than having to plead ever year for crumbs from the table. There are hundreds of English language TV channels and radio stations, but only one TV channel and one radio station in Welsh."