Supermarket protest: Call to extend law to rest of the private sector 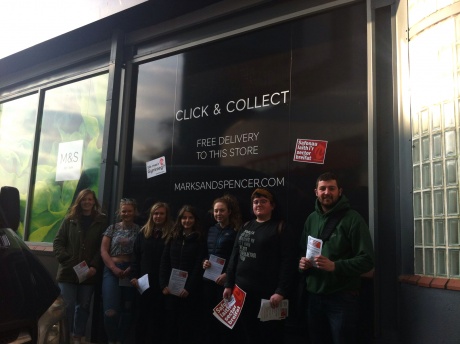 Campaigners have picketed supermarkets in Cardiff and Bangor over a lack of Welsh language services with a call to strengthen the law.

A group of protestors gathered outside a Lidl store in Splott in Cardiff, which has recently been refurbished, and M&S in the centre of Bangor today. They held placards demanding 'Safonau Iaith i'r Sector Breifat' (Language Standards for the Private Sector) as a part of a campaign to beef-up current language legislation.

The Welsh Government plans to amend the 2011 Welsh language law over the next couple of years. Pressure group Cymdeithas yr Iaith argues that the new act should create general rights to the Welsh language and extend them to the whole of the private sector.

"Very many high street stores and supermarkets ignore the needs of the Welsh language across the country. There are a number of examples, like Lidl and M&S, where Welsh language provision is cut with rebranding or when new shops open. Legisation would ensure that doesn't happen, and, indeed, it should lead to a significant improvement.

"Supermarkets are part of people's everyday lives, it's very important that people can shop in Welsh. We hope the Government will take the chance to include supermarkets, and the rest of the private sector under the Welsh language law as they go through the process of strengthening it.

A recent report by the Welsh Language Commissioner has found that a majority of the public – whether they speak the language or not - like to see supermarkets use Welsh and want to see greater use of it. Manon Elin added:

"The Welsh Language Commissioner's recent report, as well as the research we have published, shows that a number of these big companies won't supply full Welsh language services unless they are required to so. That's why legislation is necessary, rather than relying on good will."

Current legislation allows duties to provide Welsh language services to be placed on energy, transport and telecommunications companies, but not other private businesses.