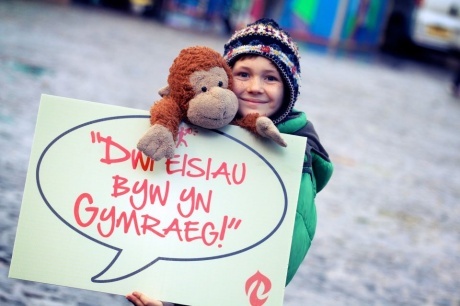 Language campaigners have reacted vigorously after understanding that the current draft of the Curriculum Bill — set to be published soon — includes English as a compulsory part of the curriculum, thus posing a threat to immersion methods, despite promises made to the contrary last year by the Education Minister, Kirsty Williams MS.
The publication of the Bill’s white paper in January 2019 ignited strong opposition against proposals to make English compulsory on the face of the legislation, due to its damaging effects on immersion methods. The Government was then forced to make a u-turn and the Education Minister gave firm assurances that these proposals would be dropped — a move that was welcomed across the Welsh medium education sector.
However, Cymdeithas yr Iaith understands that it is remains the Government’s intention to make English a compulsory element of the curriculum, and that the Bill includes a clause that will make English and Welsh compulsory by default, but enable individual governing bodies to 'opt out' of making English compulsory before the age of 7 in their own school.

At a meeting with the Minister for International Relations and the Welsh Language yesterday (1/06/2020), the Minister confirmed that this was the intention, telling Cymdeithas “if English wasn't compulsory in the Bill, but Welsh was, the 80% of the population who don't speak Welsh would make a huge fuss.”

In a letter to the Education Minister, Cymdeithas yr Iaith has expressed serious concern regarding these proposals and the comments made by Welsh Language Minister. The letter notes that the option to ‘opt in’ to the immersion period means that it will be possible to change the language medium of a school at the whim of a governing body, thus hindering any strategic planning by local authorities and the Government to grow Welsh-medium education.
According to the letter, the Bill in this form would ‘undermine Welsh-medium education across the country’ and ‘run counter to the Government's commitment to implement a single continuum of teaching Welsh and the target of a million Welsh speakers.’ The letter also refers to the ‘negative impact’ that making English compulsory on the face of the legislation would have on ‘the ethos and practice of schools and other educational contexts where it is already a struggle to make Welsh the norm as a medium of learning and communication’.
The letter explains that “there is no need for legislative enforcement to ensure that pupils are fluent in English. In reality, English is bound to be taught in our schools, and that is also ensured through the Languages, Literacy and Communication Area of Learning and Experience, without the need for a specific legislative proposal.’

‘Moreover, in the current linguistic context, children in Wales will acquire English as it is such a powerful and ubiquitous language in the lives of everyone in the country...it is clear that it is Welsh, and specifically Welsh-medium education, that needs legislative support, not English’.

Mabli Siriol, Chair of Cymdeithas yr Iaith’s Education Group, commented:
“The Government’s plan to make English compulsory poses a significant risk to Welsh medium education. Despite the Government’s promise that it is open to removing the compulsion of English from the Bill if there are good reasons to doing so, it seems that it will proceed with these damaging proposals while ignoring all the evidence against them. The Government has not provided any educational or legal justification for making English compulsory, and not a single expert or organisation has recommended it.”
“The Welsh Language Minister’s comments suggest that this is a purely political decision, on the basis of scaremongering and condescending attitudes towards the majority of the people of Wales who do not speak Welsh but who wish to see our children leaving school fluent in the language.”
She added:
“There is a real risk that the Government will miss the golden opportunity presented by the new curriculum to ensure the right of every single child in Wales to the Welsh language, and therefore make it much harder, if not impossible, to reach the Government’s target of a million Welsh speakers by 2050."
Click here to read the letter that was sent to the Minister in full
Twitter Tweet
Trydar
Facebook Youtube Vimeo Flickr