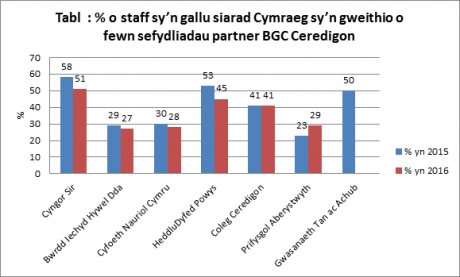 Figures showing that the number of Welsh speaking workers in some of Ceredigion's public institutions has declined since 2015 have raised questions about Ceredigion County Council's language strategy.

In a letter to the Chief Executive and Leader of Ceredigion Council, Cymdeithas yr Iaith notes a number of gaps in the strategy, that has an emphasis on maintaining existing activity rather than building on it and developing further.

Among Cymdeithas' recommendations are calls for:

A spokesperson for Cydmeithas locally said:
"The number of Welsh speakers is declining and if the County Council, and other public organisations want to prevent that, they need an innovative strategy that will tackle issues such as outmigration.
"How many people even know that this strategy is in place? Why hasn't it taken advantage of the host of community groups and organisations in Ceredigion to get everyone involved? We all have the same goal in mind."