"We want to live in Welsh" 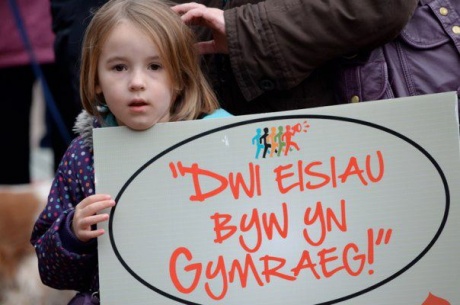 People from all over Carmarthenshire are expected to attend a rally held by Cymdeithas yr Iaith outside County Hall, Carmarthen on Saturday January 19th 2013 to voice their concerns about the dramatic decline in the numbers of Welsh speakers in the county and to demand a future for local Welsh-speaking communities. The families of two local heroes, Gwynfor Evans and Ray Gravell will lead the crowd alongside prominent figures from the political and cultural world to pledge "Dw i eisiau byw yn Gymraeg / I want to live in Welsh".

Amongst those who have stated that they will sign the pledge on the day are Carmarthen Mayor Councillor Philip Grice, local County Councillor Alun Lenny and the leader of the opposition in the County Council Councillor. Peter Hughes-Griffiths.

"Our hope is that over a 1000 people in Carmarthenshire will sign the Pledge by the end of this month. The Census figures have shocked a great deal of us and the Rally is a chance for us all to get together to show our committment to live in Welsh and to demand that the Welsh Government and our local County Council take urgent steps to strengthen and therefore safeguard our Welsh-speaking communities."

“There’s no point sitting back and accepting the Census results: with positive campaigning and political will, we can change our fate and that of our Welsh language communities. The language and its communities cannot afford more of the same from Government or organisations in Wales more widely."

“It’s time for bravery and new ideas from our politicians. If the Welsh Government accepts this is a crisis that requires an urgent response, then there’s hope. We believe it’s the wish of an increasing number of people in Wales to live in a country where we can all live our lives in Welsh; we also understand that ensuring the strength of Welsh language communities is the only way to realise that vision. What’s needed now is the political will to realise the ambition of people around the country.”