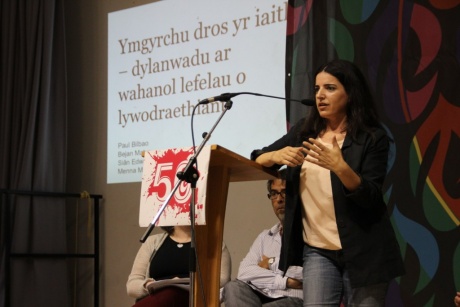 LANGUAGE campaigners from around the world gathered in Aberystwyth today as part of Cymdeithas yr Iaith Gymraeg's fiftieth anniversary celebrations.

Speakers from Colombia, the Basque Country, Turkey, Catalonia and Wales will discuss language campaigns in a special conference held on the same weekend as Cymdeithas yr Iaith’s annual general meeting. Amongst the speakers will be Dr Sian Edwards from Swansea University, the author and campaigner Ned Thomas, Bejan Matur a Kurdish author from Turkey, Paul Bilbao Sarria from the Basque Country and Maria Areny from Catalonia. 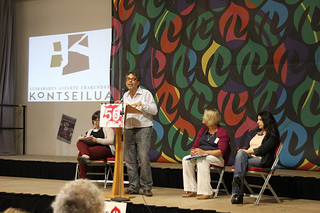 Cymdeithas yr Iaith Gymraeg’s general meeting will be held over the weeked as well, and members will discuss a motion which would devolve power to local regions and change the present membership system.

“The events over this weekend are very exciting. We hope that campaigners from various countries share ideas and experience for the benefit of the Welsh language and other languages. Certainly, the Welsh language wouldn’t have official status and the Coleg Cymraeg wouldn’t have been created without Cymdeithas’ efforts. There have been many successes, but there is still so much to do – at a community level as well as securing basic rights as was highlighted recently by Jamie Bevan’s experience in prison.”

“I expect an enthusiastic debate about our structure at the AGM. As a society, we are always keen to improve our ways of working and the membership will decide how that happens over the weekend.”

Euro-MP Jill Evans, one of the speakers at the conference, added:

"Languages are part of our culture and identity. Learning new languages enables us to see the world in a different light. Respecting the rights of others, including the right to use their own language is fundamental to our democracy.

"Yet, like peoples around the world, we have had to fight for recognition and equality for the Welsh language. There have been huge advances since the Welsh Language Society started campaigning in 1962, but that campaign is far from over. My colleagues from Malta, Ireland, Luxembourg and Estonia can speak their own languages in the committees and chambers of the European Parliament, but if I speak in Welsh I have to give my own translation. You can't listen to Welsh though the headphones as you can all of the twenty three official languages. Welsh is only semi-official in the EU, although an official language in Wales.